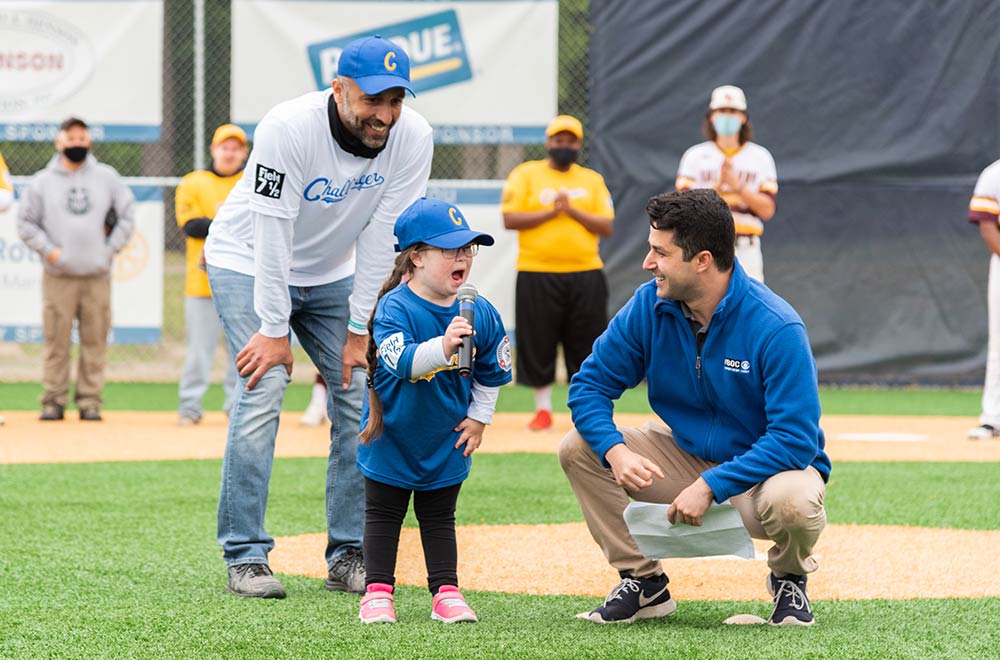 Player Cheyanne Shrieves starts the Challenger Little League season by announcing “Play ball!” on Saturday, May 8, at Field 7 ½. Her coach, Wicomico County Recreation, Parks & Tourism Director Steve Miller, is behind her, and Opening Day emcee Zach Parnes of WBOC is next to her. (Photo by Josephine Noonan.)

SALISBURY, MD – With a “Play ball!” from player Cheyanne Shrieves, the Lower Shore’s first season of Challenger Little League got underway Saturday, May 8.

An Opening Day ceremony kicked off the first official season of Challenger Little League at Field 7 ½, which was designed to provide individuals with physical or mental disabilities the opportunity to play baseball. The field is located between fields seven and eight at the Henry S. Parker Athletic Complex in Wicomico County.

Wicomico County Recreation, Parks & Tourism Director Steve Miller and Acting Wicomico County Executive John Psota both spoke about how this project has been a community effort.

“This community has rallied to create something really, really special,” Miller said.

An inclusive playground and sensory trail opened earlier that week at the Complex as part of Project 7 ½. 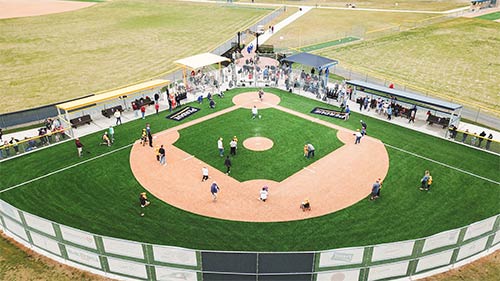 “This ball field, the playground and the sensory trail has been a truly community effort, in every sense of the word,” Psota said.

Funding came from private donations as well as state and County monies.

Before two games were played, attendees cheered for Challenger Little League players as they made their way to the field in a parade that went under the Field 7 ½ arch. Players walked with their Buddies, who help and support Challenger participants in their games while also forming friendships with them.

“I have a feeling that this field and playground is going to result in a lot of lasting memories and friendships also,” Psota said.

Jim Perdue, chairman of Perdue Farms, threw the ceremonial first pitch, saying that the Perdue family and The Franklin P. and Arthur W. Perdue Foundation are excited to be part of this effort.

"We want you to have a great, great time on this field, and I know you will," he said.